CARDINAL WUERL ATTACKED FROM THE RIGHT

CARDINAL WUERL ATTACKED FROM THE RIGHT 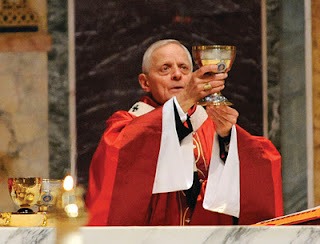 Last week, Donald Cardinal Wuerl was attacked by Catholic writer George Neumayr in a piece that was posted on the website of The American Spectator (TAS). It did not receive much attention, which is why I ignored it. But now Neumayr has struck again, this time in response to a complaint registered by Wuerl’s communications director, Chieko Noguchi, with TAS.

Neumayr alleges that a priest in Cardinal Wuerl’s archdiocese was put on leave for denying communion to a lesbian at a funeral mass. His version has been contested by the Washington archdiocese [click here]: what led to the sanctions were “credible allegations” regarding the priest’s “intimidating behavior toward parish staff and others.” Even if Neumayr were right, his condemnation of Cardinal Wuerl in the vilest terms is inexcusable.

Neumayr says Wuerl is one of those “cufflinked cardinals” who “worry not about punishment in the next world but slights in this one”; their goal, he says, is to curry favor with the “Pretty People.” Worse, he has the audacity to put the cardinal on notice, exclaiming that “Wuerl can only earn the red of his rich robes through a willingness to endure the blood of Jesus Christ’s martyrdom.” Neumayr is not above wallowing in the dirt: he refers to the Washington archbishop as “Wuerl the girl.” And in his latest screed, he comes completely unhinged when he charges that Cardinal Wuerl has “exposed the Holy Eucharist to sacrilege.”

I have never met George Neumayr, but it is clear that he is a right-wing fanatic, a man whose dogmatism is as scary as the authoritarians on the left. On the other hand, I have known Cardinal Wuerl for about 25 years, and I have nothing but respect for him. When I was a professor in Pittsburgh, it was Pittsburgh Bishop Donald Wuerl who got me involved in the Catholic League. Unlike those who hit below the belt and then claim victim status (Neumayr says Noguchi’s phone call to TAS has created “troubles” for him), Wuerl is a real man. That’s the kind of person I like, not the girly-type who hit-and-run and then whine when confronted.