Bill Donohue was Honorably Discharged from the U.S. Air Force in 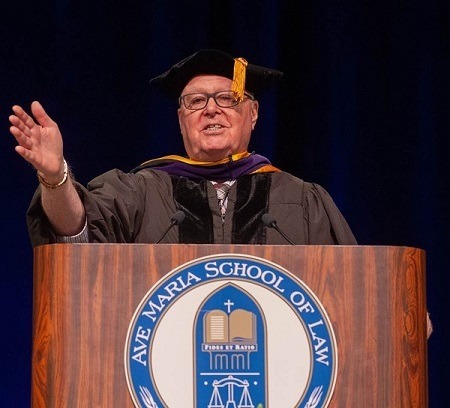 1970, and began his teaching career in 1973 working at St. Lucy’s School in Spanish Harlem. In 1977, he took a position as a college professor teaching at La Roche College in Pittsburgh. In 1980, Bill was awarded his Ph.D. in sociology from New York University. In 2022, he was awarded an Honorary Doctorate of Laws from Ave Maria School of Law.

His next book, The War on Virtue: How the Ruling Class is Killing the American Dream, will be published in the spring of 2023.

Bill is the president and CEO of the Catholic League for Religious and Civil Rights, the nation’s largest Catholic civil rights organization. The publisher of the Catholic League journal, Catalyst, he served for two decades on the board of directors of the National Association of Scholars. He writes regular columns for CNSNews.com and Newsmax.com.

Bill also serves on the advisory boards of many organizations, including the Society of Catholic Social Scientists, and the Christian Film & Television Commission.

Winner of several teaching awards, and many awards from the Catholic community, Bill has appeared on thousands of television and radio shows speaking on civil liberties, social issues, and religion. In 2022, he was named by the U.K.’s Catholic Herald as one of the top 250 Catholic leaders in the U.S.